It will soon be two years since Netflix first announced it would be producing movies based on Rick Riordan’s The Kane Chronicles. Despite there being very little official news, we still know a lot about the upcoming movies. So here’s everything we know about The Kane Chronicles on Netflix.

Netflix first announced the project in late 2020. It was officially announced to the public in September 2020, although they had been working with Netflix since October 2019.

In this deal, Netflix has the film and television options/rights to adapt all three books. Although Netflix has the TV rights, they are expected to turn the books into movies, starting with The Red Pyramid (more on this in a second).

All projects are set to be live-action movies and produced by Mythomagic, Inc., a production company founded by Rick and Becky Riordan. The pair work on the projects and act as “guardians of the source material”.

“Rick and Becky have sold the film/television rights to Kane Chronicles to Netflix for development as a feature film series. Rick and Becky are currently serving as producers on a live-action adaptation of the first book The Red Pyramid. The script is currently being written by our screenwriter, who is based in London.”

What is The Kane Chronicles about?

The Kane Chronicles is divided into three books: 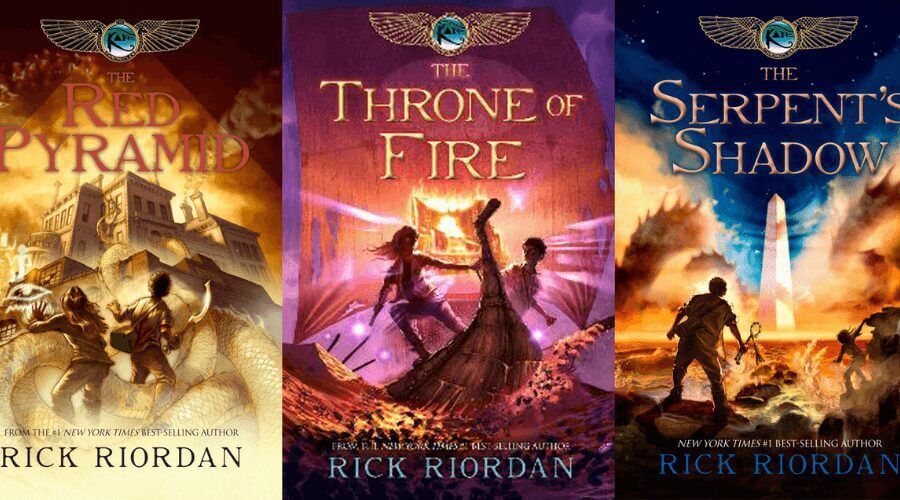 Book covers of The Kane Chronicles

Often compared to the Percy Jackson series, the series is heavily inspired by the mythology of ancient civilization, in this case ancient Egypt.

The story takes place in the present day, where siblings Carter and Sadie Kane are taken in by their Uncle Amos after their father, Julius, an Egyptologist, goes missing.

Learning of their family’s rich magical heritage, the pair of siblings also learn that they have been chosen as “hosts” by the Egyptian gods Horus and Isis, respectively. Soon finding themselves on the run from an ancient Egyptian order of wizards, Carter and Sadie stumble upon an evil plot to destroy the entire North American continent.

See also  Viewers of Disney+'s Rosaline are all obsessed with this part of the movie.

Where is The Kane Chronicles in development at Netflix?

Thanks to Rick and Becky Riordan, we actually have a good track of where the movie is at in terms of development. Sadly though, as of August 2022, the title is most likely still in active development and nowhere near release or even going into production.

In December 2020, just a few months after the initial announcement, Becky Riordan posted to say:

“I’m reading Netflix’s updated script for the Red Pyramid before a meeting and I like the changes. Small thing? Remind me what color Muffin is supposed to be? I thought it was a yellow or brindle Mau or is it just the artwork? Does it look different in other countries?

In March 2021, a blog post about Rick Riordan gave us a major update on the Netflix movie:

“The Red Pyramid feature film project on Netflix is ​​still in the script review phase, but we are making good progress. Our wonderful writer has done a second run, and now we’re working with our production team and the writer to get it into shape so we can send it to our partners at the studio. If you’ve been following so far, you can guess what’s coming next. The studio will also have notes for us. We will address those. The script will probably go through a few more revisions. (Just like writing a book!) Once everyone is happy with it, we’ll start talking about next steps, but I imagine (just a guess) that we have a few more months to go before we get to that point. The script is like the foundation of your building. It has to be absolutely solid for us to build a great movie out of it. And just a reminder, we are planning a live action feature based on Kane Chronicles I: The Red Pyramid.”

In July 2021, a blog post says they’re still working on notes but, more interestingly, Rick talked about the process as a whole, referring to it as a “litmus test.”

A few months later, in October 2021, a new blog post updated us on those scripts being submitted to Netflix. The post concluded that they are looking for a second screenwriter, saying:

“We also had great conversations with our production partners for this Netflix adaptation as we look to identify the best screenwriter for a second version of the script. We’ve got some great tracks and should be moving forward with a rewrite soon. Again, this is quite normal for the screenwriting process. Different writers bring different strengths to the project, and we want to make sure we have the script in the best possible shape before we talk to the directors. We continue to be very excited about the possibilities, as are our partners at Netflix!

In June 2022, becky riordan said“Our screenwriter is hard at work on the revised script for The Red Pyramid.” The most recent update came in August 2022 when it was posted that Diandra Pendleton-Thompson is working on the current round of reviews with the post saying:

“This week, we’re also expecting the latest script draft for The Kane Chronicles: The Red Pyramid from Diandra Pendleton-Thompson, and I can’t wait to read it! She’s done a fantastic job in everything I’ve seen so far, which makes me even more excited to see this project moving forward on Netflix.”

Elsewhere, Rick Riordan’s Percy Jackson franchise is getting the adaptation treatment at Disney. That project is a little further along than Netflix’s with the next series, Percy Jackson and the Olympians. It is likely to be released in 2024 and filming during 2022. daughter of the deep is also getting a Disney+ adaptation.

are you looking forward The Kane Chronicles on Netflix? Let us know in the comments below.