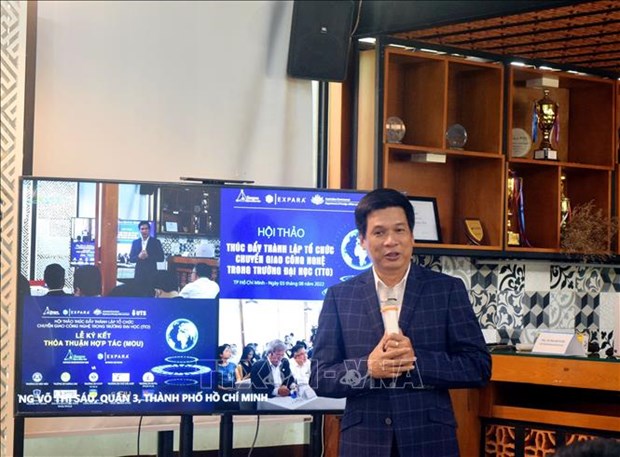 City HCM (VNA) – Huynh Kim Tuoc, General Manager of the Saigon Innovation Hub (SiHub) Start-up Support Center under the HCM City Department of Science and Technology, stated that Vietnam has huge potential for technology development and transfer thanks to its highly qualified experts and intellectuals with rich experience in this field, especially young and talented. human Resources in the universities

Tuoc said that at a recent workshop in Ho Chi Minh City on promoting the establishment of technology transfer offices (TTOs) in universities, which was co-organized by SiHub, Australia’s University of Technology Sydney (UTS) and Singapore’s leading incubator fund, Expara.

The workshop attracted a large number of domestic and foreign experts, and university representatives from southern provinces and cities to exchange, discuss, and evaluate the current situation, advantages, difficulties, and challenges, as well as propose models and effective solutions that bring benefits. practices of establishing technology transfer offices in universities.

For the past 50 years, Vietnam has focused its resources on training and research, but has not developed the commercialization of research and inventions.

“It is expected that in the future the commercialization of the inventions and products of the country’s universities will be developed,” he said.

The center focuses on promoting the development of existing potential in technology development in universities, he said.

It is to choose universities to consult, build processes and organize devices to establish technology transfer in order to commercialize research and inventions that provide economic value.

Douglas Abrams, founder and CEO of Expara, said Vietnam has great potential for high-quality human resources and entrepreneurship that can contribute significantly to the country’s technological development.

The intellectual assets of universities and research institutes are the basis for supporting start-ups, he said.

“The role of universities is to connect potential ideas, build strong teams and engage with companies to successfully carry out commercialization,” he said.

UTS’s Nguyen Diep said the university’s technology transfer model is being implemented by many partners.

The experts pointed out many challenges of technology transfer and commercialization, such as the science and technology ecosystem not having a clear orientation, with low connectivity and interaction.

It also needs to improve the legal framework, develop technical and financial infrastructure, and promote creativity and innovation capacity, management capacity and investment in universities, they said.

On this occasion, SiHub, UTS, Expara and universities in the southern region signed cooperation agreements to promote technology transfer activities in the coming years./.