We asked Iain Macintosh to manage Newcastle United on Football Manager 2022 and six months later he’s still with us. It’s really quite sad, but hey, we’re not here to judge him.

After an extremely busy summer we are ready to launch our fourth full campaign on Tyneside. We’ve finished seventh, fourth and fourth, we’ve won the FA Cup and the League Cup and we’ve made it to the last eight of the Champions League. We did it all on what is still only the seventh largest payroll in the division. By reasonable standards, Steve Bould and I performed well.

And yet I am aware of the smoldering dissatisfaction in the fan base. There were mixed reactions to our transfer deals and even calls for Andrea Belotti to be sold. Over my corpse.

But even if I’m right and everyone’s wrong, it’s clear that this is the season where we need to step in and fight for big prizes. And we open the campaign in Southampton.

We are in full strength and will focus on the left flank of our two reversible formations today. Kieran Tierney gets the thrill-seeker’s license, Ademola Lookman will give way to him and let’s see how Big Benji Sesko fares as an advanced striker. 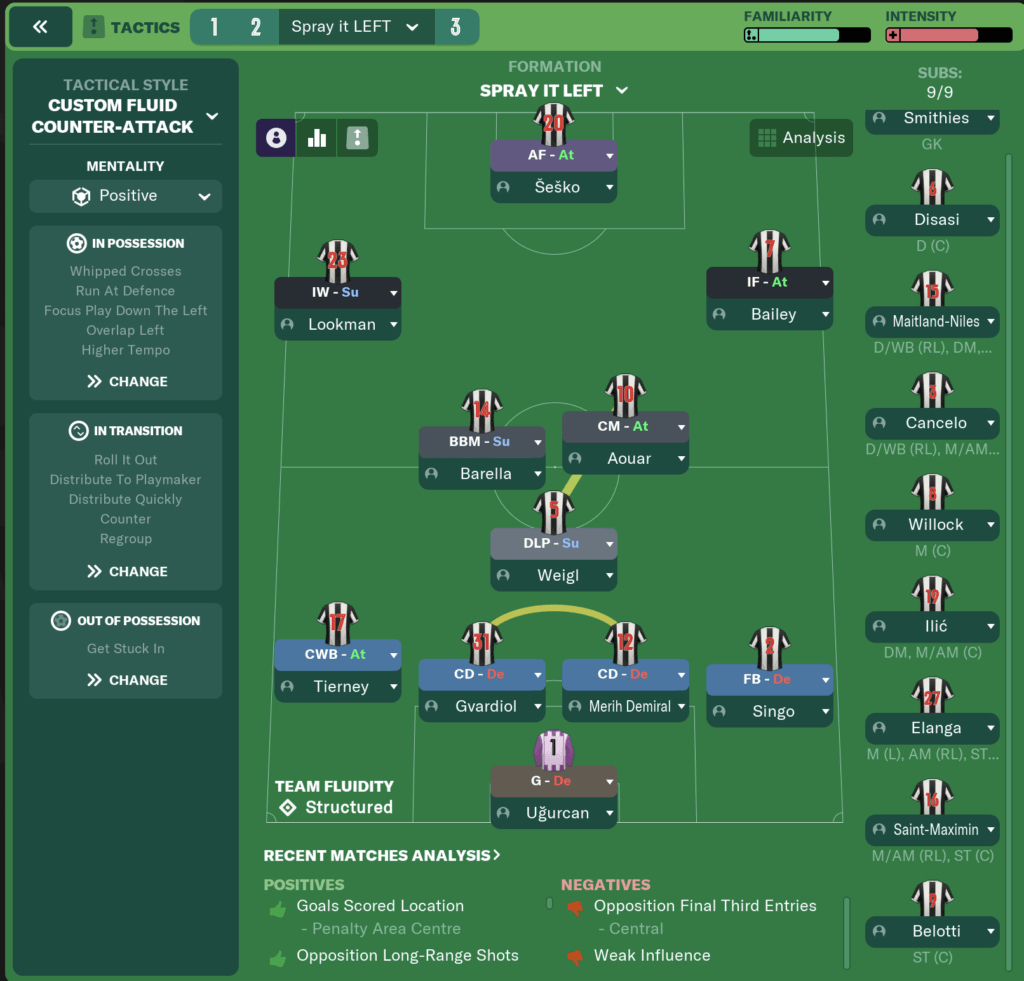 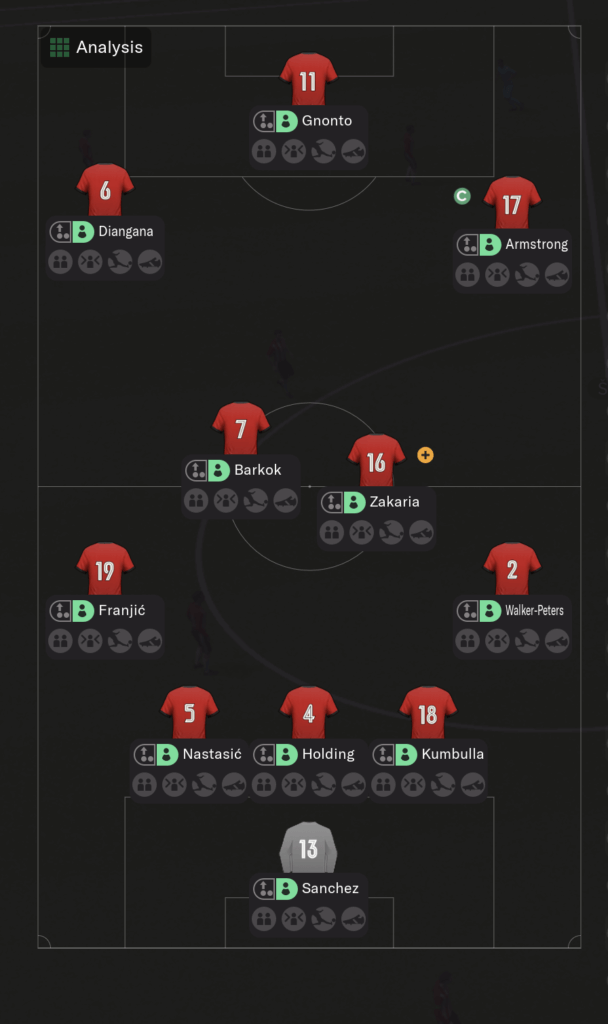 We start very bright, find ourselves with a lot of space on the left flank, but waste the space. Tierney fires in a series of piss-poor crosses before Southampton finds her feet and starts causing us problems on this flank. Kyle Walker-Peters suddenly looks like Cafu and it’s not long before I’m back on the sidelines berating my players like the summer of optimism never happened.

I shift focus to the right flank at the break, pulling back Tierney and Lookman. Again we start the half-time well, creating and squandering a few chances and then retiring to our shells. With nobody playing particularly well, I drive out the old master, Andrea Belotti, and it turns out to be just in time. Referee Jon Moss spots a handball on a corner and gives us a penalty. Belotti sends the goalkeeper in the wrong direction. My king.

You might think the goal would reassure us, but if anything, it only grants comfort to the Saints. The last 10 minutes are spent playing ball, failing and watching our opponents smash the ball over the bar. All in all it wasn’t very impressive. We have to be better than that. 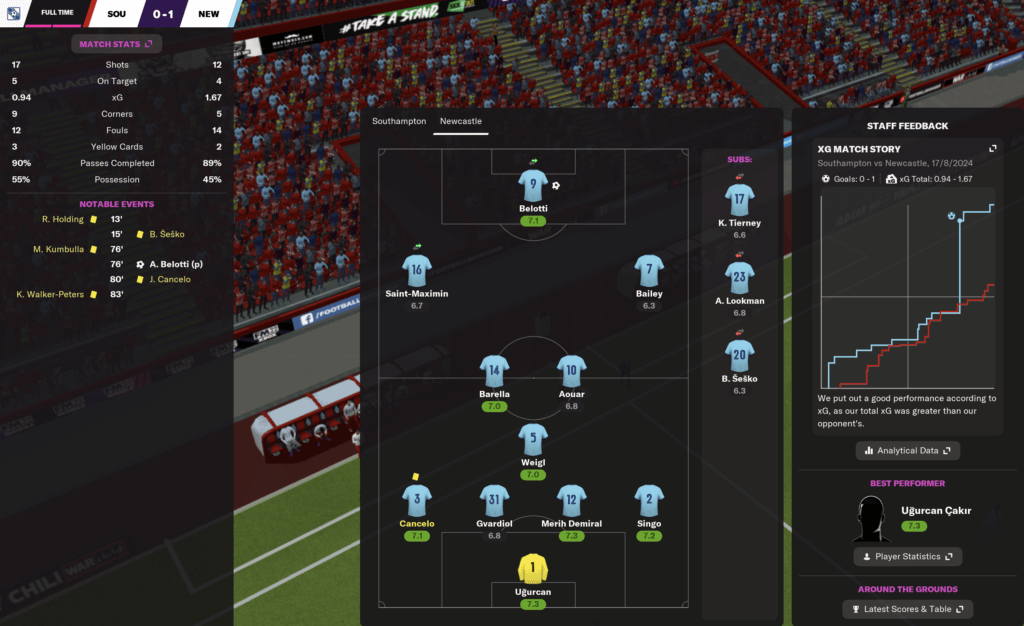 Arsenal are the first visitors to St James’ Park and I would imagine they are looking for revenge as we took their Champions League place from them on the final day of last season. They are still led by Mikel Arteta and it looks like their plan is very similar to ours; they want to tear us open to the left. It therefore seems logical to play in the same form again and leave one man to guard against Gabriel Martinelli. And that man will be Merih Demiral, a guy much better at defending than Wilfried Singo, who loves to run. We’ll also be putting Allan Saint-Maximin back on the site if he deigns to show up. 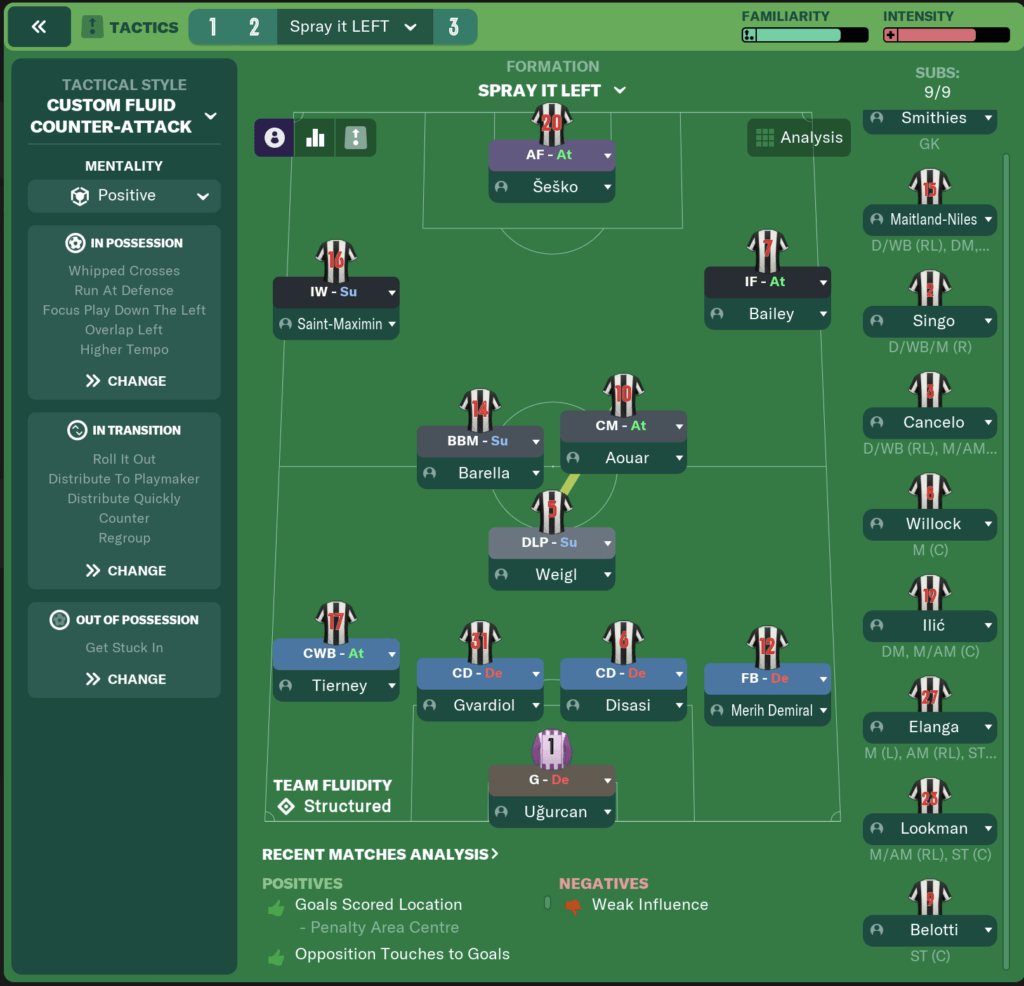 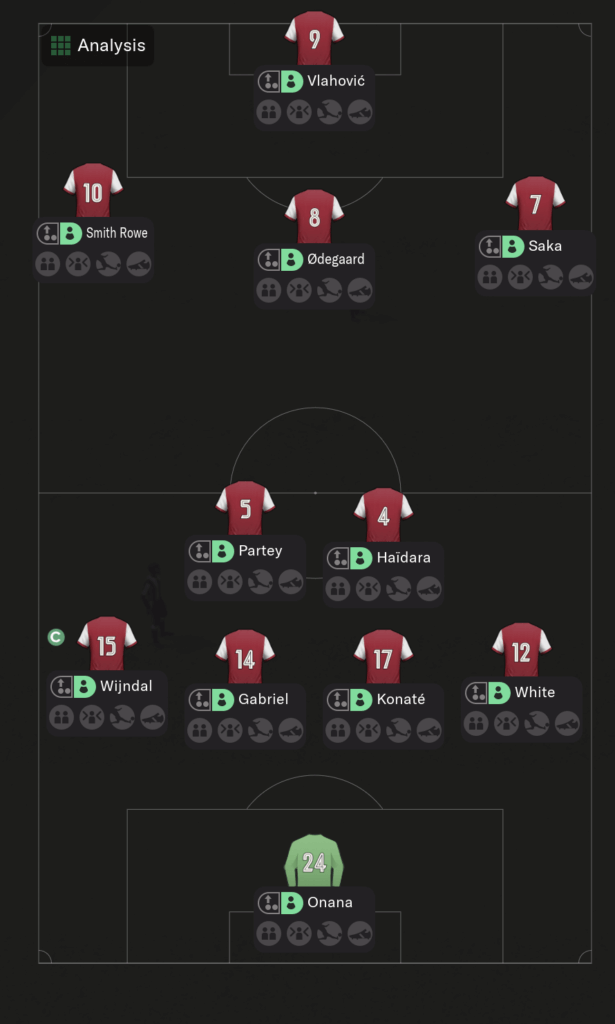 We’re much more composed this time around and are comfortably crushing Arsenal’s ambitions. Demiral grabs Emile Smith Rowe by the shirt collar and puts him in his pocket, where he stays all afternoon. We make a number of chances and it’s no surprise at all when Leon Bailey finds Sesko over the top with a big ball and the tall Slovenian doesn’t make a mistake. 1-0

But we get lost again after the gate. Houssem Aouar is out with a minor injury, with Ivan Ilic replacing him, but the chances suddenly dry up. Worse, Arsenal suddenly gets going again on the hour. We blocked the right flank with Demiral, but we can’t eliminate Martin Odegaard in the middle. He has two big chances for Dusan Vlahovic, one being tweaked into the lower stratosphere, the other being turned around the post by Ugurcan Cakir.

We look tired and leggy, which is amazing considering this is only the second game of the season. With Demiral and Axel Disasi doing so well at Arsenal’s Dangermen, I don’t want to swap crosses. So we just slow down, kill the spectacle and win another game where a draw would probably have been a fairer outcome. I hope we start performing soon; this is all a bit below average. 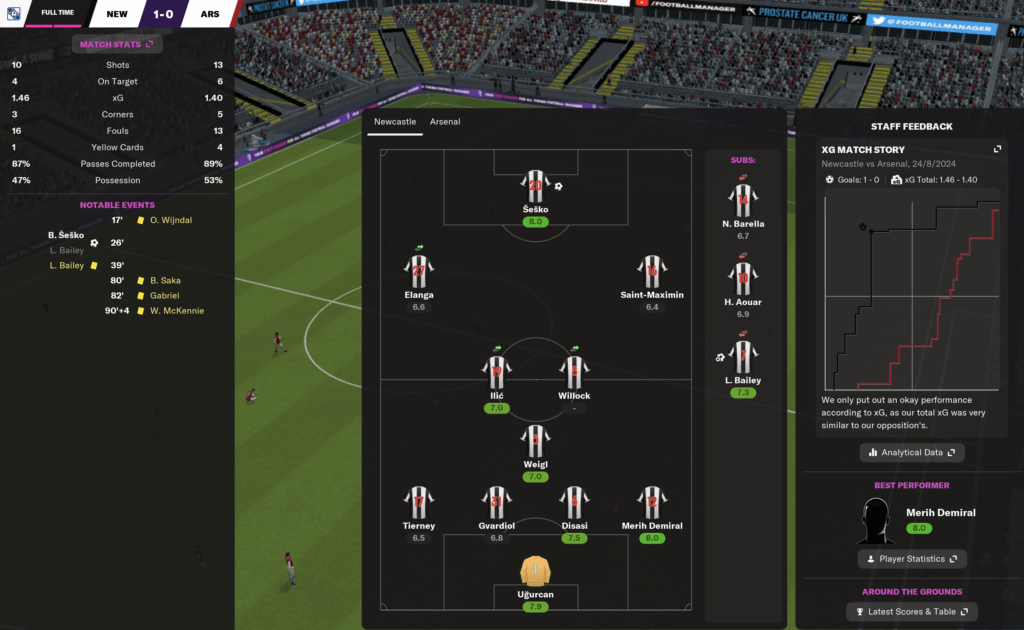 “If it doesn’t work, it’s because we’re not working,” Bouldy says, sounding suspiciously like something he read on a motivational poster. But I think it’s a fair point. There are three sessions this week as we strive to adapt to the new tactics. We’re working specifically on offensive overlaps, but we’re also making time for the villain’s last resort: the offensive set piece sessions.

Everton appear to be coming forward through the brilliant Marcus Edwards on the right so we bring in Joao Cancelo for his full debut to keep him locked on. There are also far-reaching changes elsewhere. Nicolo Barella has only shown his talent in a flash so far, so I will give him more freedom and bring in Ivan Ilic to support him. Anthony Elanga will play on the right flank and while Jools Weigl has been very good so far, I’ll refresh midfield with a more conservative Sean Longstaff. 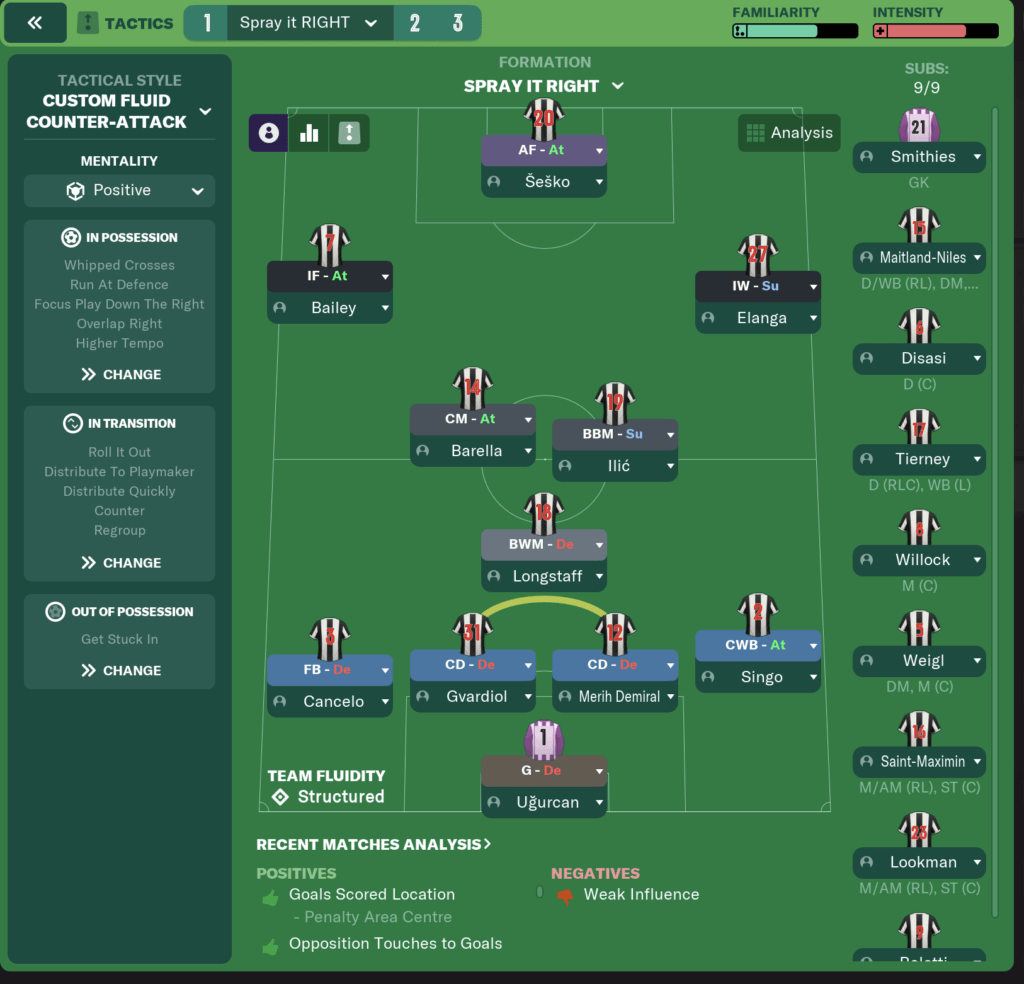 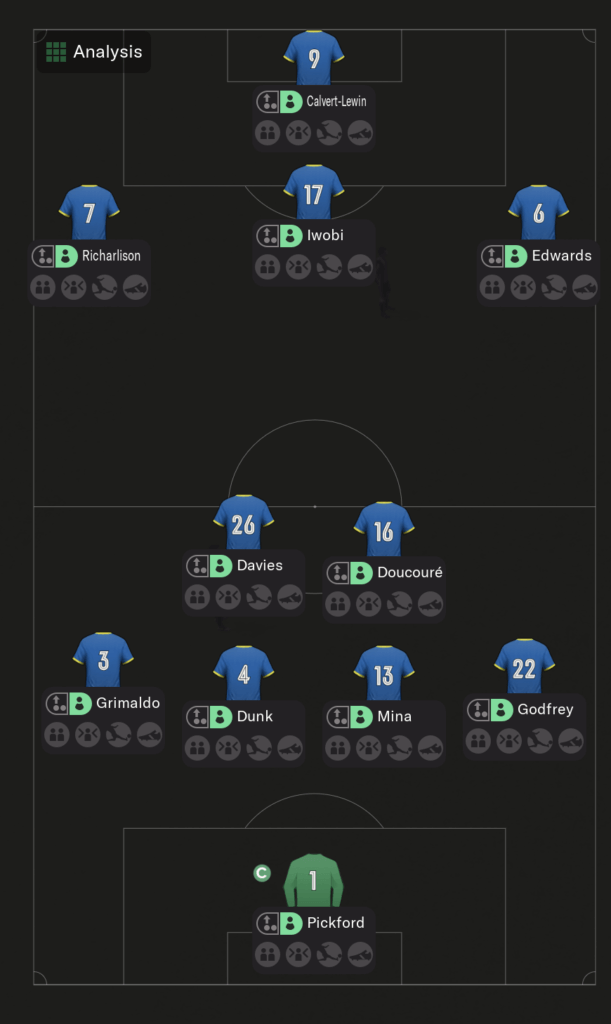 Now let’s play football! In the first 10 minutes alone, Singo and Elanga meet three times and impressively interlock on the right. We can’t capitalize on it but it bodes well for the rest of the game, or at least it does until Alejandro Grimaldo throws a deep cross into our box, 5ft 9in Marcus Edwards 6ft Cancelo in the air and Dominic Calvert- Lewin proposes is there at the end. Typical. We play badly for two games, win two games and on an afternoon when we’re looking good, we give in right away.

But we respond well; We continue to play on the right flank and get our reward just before the break when Singo throws a long throw into the box, Sesko throws down with a nod and the last standing longstaff smashes him into the top corner.

It’s the perfect time to score but then we throw away the mental advantage as Barella sees Calvert-Lewin halved and red right after the break.

We make the appropriate changes, switch to the throttle back formation and try to block off the midfield with Weigl and Longstaff. Tierney replaces the disappointing Cancelo to give us a connection on the left. We can’t be completely relegated – we’re not good enough to defend for 44 minutes.

Our ambition pays off. Sesko finds Bailey on the left and then clatters up for the back ball. 2-1 But just as we seem to have them contained, the irrepressible Edwards gets behind Tierney and goes into the box. It’s a punishment and Edwards wants it for himself. Once again, we owe a debt of gratitude to Cakir, who takes a full leap to the left to stop him.

But now we’ve broken up. I tell Tierney to play like a no-nonsense full-back, but he always outperforms Edwards. I ask Cakir to stop long hitting the ball every time he gets near him, but he doesn’t seem to hear me. I advocate slowing down the game, passing the ball short, playing from the back and, when we get over the halfway line, working the ball into the penalty area. But every time they complete four or five passes, someone looks up and hits a 50-yard ball to nobody. It kills me.

Everton take chance after chance after chance but somehow the 10 men hold on. It’s a strange feeling. We used the potential of the overlap on the right, we saw a good performance from Elanga, Longstaff was a giant and Sesko scored again. But Demiral was everywhere and Barella’s quiet start to the season turned into a disaster. We’re top, with three wins out of three, but we don’t really deserve any of them. 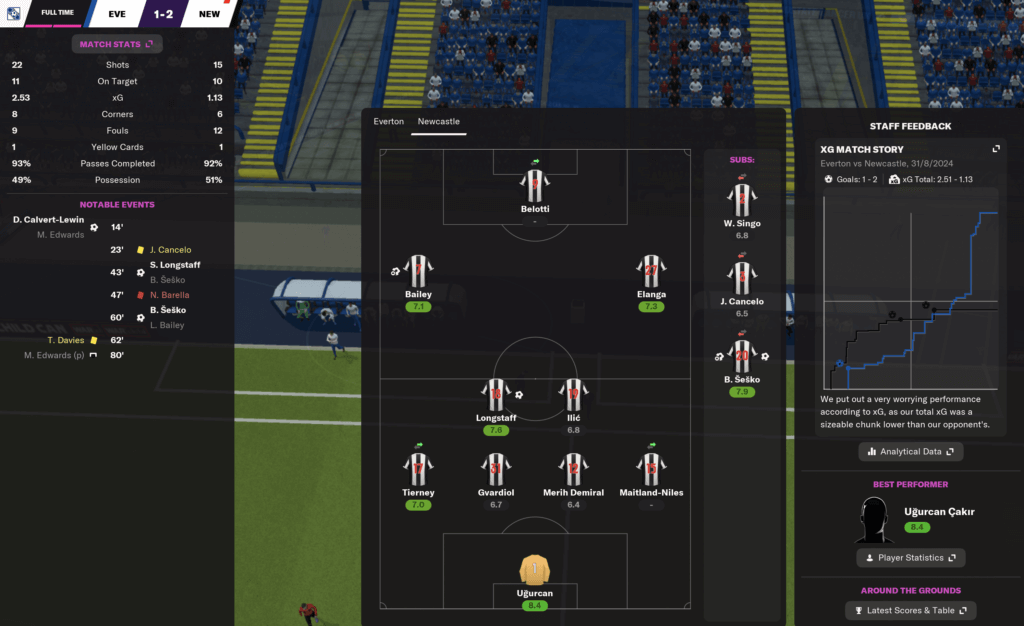 The Champions League draw pits our relatively meager resources against current champions Paris Saint-Germain (so wash sports – you wouldn’t catch it the nation state/football club that caps their manager at £100m net spend a year), Sevilla and Shakhtar – overall it could have gone a lot worse. Unfortunately our series of increasingly difficult domestic cup draws continues with another game against our bogeyman side Stoke City. We have to click, otherwise we’ll be eliminated again at the first hurdle.

Still, it could be worse. We could have started like Liverpool… 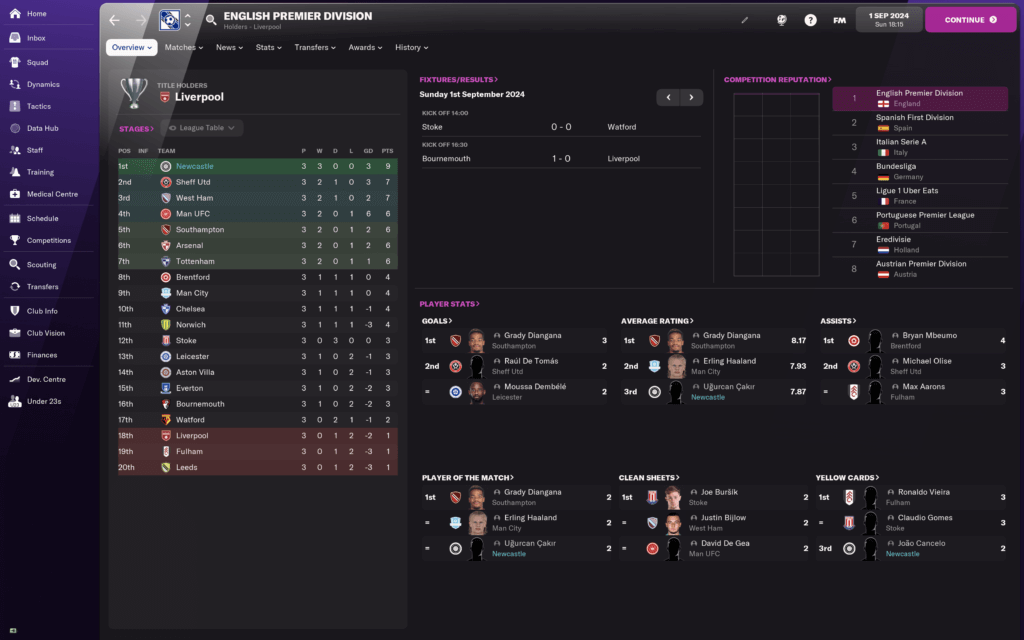 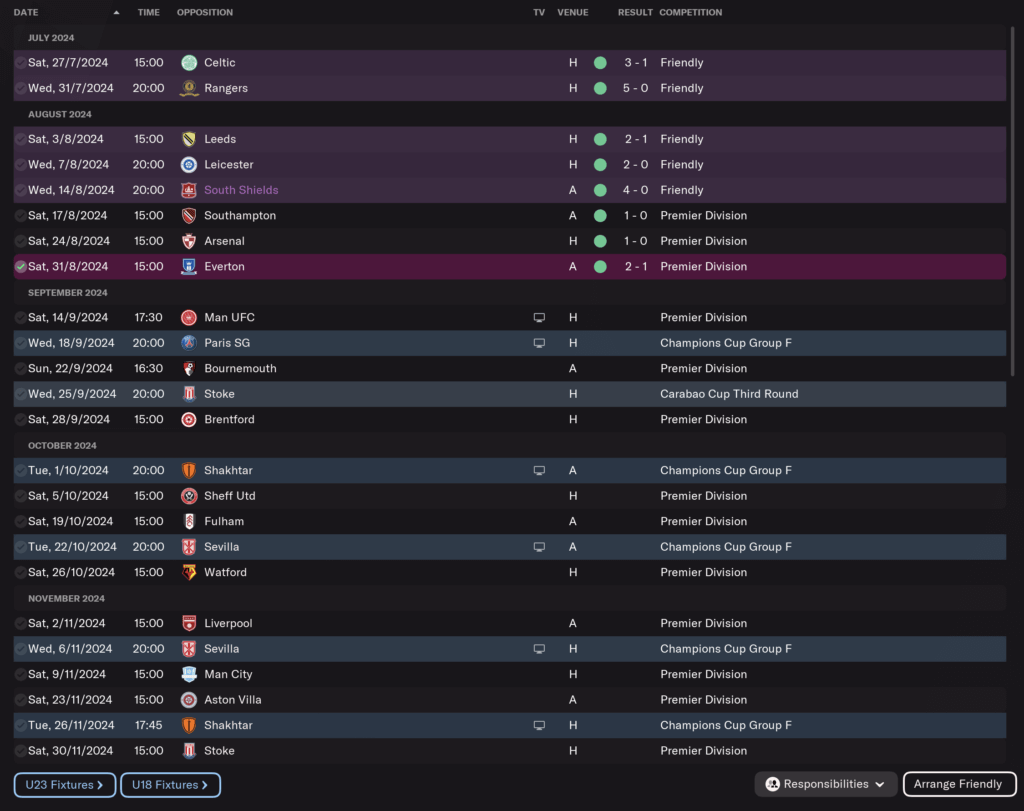 Want more FM from Iain and his team? Watch his podcast – The Football Manager Show sponsored by Livescore – for free on Apple, Spotify and all major podcast platforms and, of course, ad-free on The Athletic.