Editor’s Note: With so much volatility in the market, stay on top of the daily news! Get up to speed in minutes with our quick roundup of the news and expert opinions you need to read today. Sign up here!

(Kitco News) – This week’s topic in the crypto market was regulation, as several major developments, including a proposed new bill in the Senate and the revelation of widespread investigations into US-based cryptocurrency exchanges ., indicate that the government crackdown on cryptocurrencies has begun.

Data from TradingView shows that Bitcoin (BTC) price action has trended slightly lower over the past 5 days after reaching a high of $24,670 on July 31, ending the week down 6, 87% and trading at a price of $22,900 at the close of traditional markets on Friday. 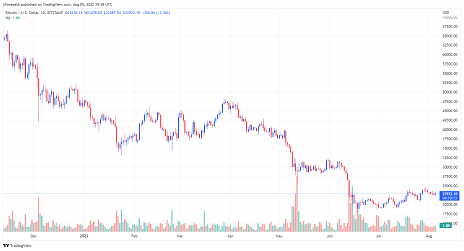 Despite the week’s negative performance, the uptrend seen over the past month remains intact, as noted in the daily update from Kitco contributor Jim Wyckoff, who stated: “Bulls are in a six-week uptrend in price. on the daily bar chart and have the short-term technical advantage.”

According to Wyckoff, this “suggests that the path of least resistance for prices will remain sideways in the near term.

Major altcoin Ethereum (ETH) has performed slightly better than Bitcoin in recent days following the introduction of the Digital Commodities Consumer Protection Act of 2022 (DCCPA) which seeks to classify BTC and ETH as commodities.

While Bitcoin has long been considered a commodity by regulators, there has been much less consensus on whether Ethereum should be classified as a security or a commodity. 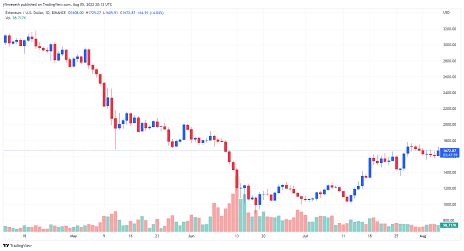 The potential for regulatory clarity surrounding Ether helped provide a boost that lifted its price to $1,680, marking a 5% gain on the day.

The vast majority of altcoins in the top 100 managed to close the week on a positive note as more investors begin to redeploy to the market after bottoming out in June and July.

The total cryptocurrency market capitalization is now $1.083 trillion, and Bitcoin’s dominance rate is 40.4%.