David Holdsworth was at the club from the summer of 2018 to February of this year.

His involvement was the subject of questions from fans on the Blues’ latest fan forum.

United owners and directors were asked how Holdsworth – who is close to Edinburgh Woolen Mill businessman Philip Day – came to join the club.

It came at a time when EWM was providing financial support to United in the form of loans, with the Blues hoping they would eventually take over the club.

When asked about the appointment of a DoF, Pattison replied, “It was suggested by EWM that we need exactly that.

“We went along to appease the future owners of the club. That is the short answer.”

When further asked if Holdsworth was proposed by EWM, Pattison said, “Initially, yes.”

The planned takeover of United by EWM ultimately did not materialize.

Holdsworth left the club in February along with manager Keith Millen on the day Paul Simpson returned to Brunton Park.

His involvement with United and the circumstances of his departure were the subject of further comment from fans and directors at the supporters’ group’s forum at Brunton Park.

Nixon said Holdsworth played a key role in helping Carlisle United stem some of the spending that had landed them in financial trouble.

“David came in and helped us negotiate lower prices for players who were coming in and definitely helped with this reversal to have a more positive cash flow,” Nixon said.

“He also helped significantly in negotiations when youth players went out, such as [Jarrad] Branthwaite and others.

“He’s also done some really good stuff. He contributed to this. We can’t take that away from him. He helped us reverse this negative cash thing, so fair dos.

“But we had to keep going from there. We sat in February [near the] bottom of the table and thought: “This isn’t going well again, we’ve committed to a bigger budget, we don’t have bigger and better players, something went wrong.”

“We had to make this change, it was a collective change. But we can’t take everything away.

“He was hired for what some people thought were the right reasons. I won’t go into all the background and discussion, but it paid off initially.

“Life is a bit like that. Not everyone is good and bad. There is a little bit of everyone in each of us. We all do things for the right reasons I think.”

Clibbens, meanwhile, said it was important not to “rewrite” Holdsworth’s time at the club, stressing the ex-DoF was not responsible for identifying any signings.

“David has made it clear all along that his role is to do the financial dealings related to the football team,” Clibbens said.

“A key role for David was to come into the game and make sure the club didn’t overspend.

“If you go back to the time of John Sheridan when David first arrived [in 2018]John said, “I identify the players” – and it’s continued from day one.

“Even in February [this year], in one of David’s recent interviews, he said he had little involvement in player identification. His role was to do business.”

Billy Atkinson of the supporter trust CUOSC said board executives’ discussions are now easier since the February changes.

Amid a discussion of Simpson’s interaction with the directors, the shop steward said: “You have to remember it was more difficult because we’ve had a middleman for quite some time. 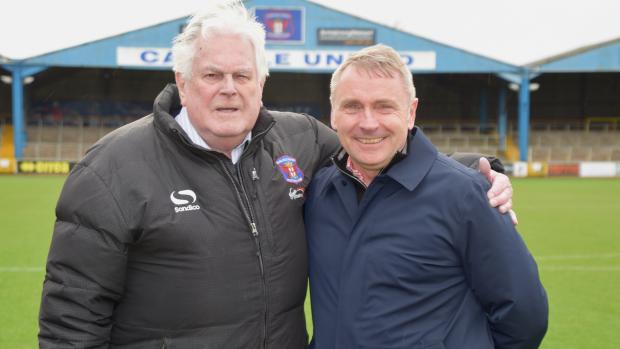 “That’s out of the equation now, so there’s direct access.”

Clibbens went on to describe Simpson as the “most laid back and comfortable” in his life and role as every manager he’d encountered.

It came as he spoke about how managers’ performance was reviewed.

“Most managers you speak to can be very nervous about these kinds of conversations,” he said.

“Paul is a completely different character. He’s so comfortable where he is, he’s relaxed so you can have those conversations.

“He doesn’t see her as a threat. He really is club first.”